The Fresh Ginger Root Used In Cooking [Fresh And Raw]

The Fresh Ginger Root Used In Cooking [Fresh And Raw]

Ginger is used in a number of different cuisines, particularly dishes from India and throughout much of Asia. Also, this root has been used for centuries, and it has made significant inroads into Western cuisine thanks to its amazing taste,

But also to its myriad health benefits of ginger. It’s been dubbed a “superfood” for many good reasons.

What we call ginger is actually the root similar to wasabi in this case. Or underground stem (rhizome), of a plant. And it is native to India, China and Japan, and is actually part of the same family as turmeric.

It can be sliced, chopped, ground, powdered and juiced depending on the use intended (food, beverages or for medicinal needs). It’s hot, spicy, aromatic qualities make it a prime addition to any number of different dishes and beverages.

It is also used for a number of health problems.

Ginger in Foods and Beverages

While ginger can be consumed on its own either for the taste or for a medical purpose, it is generally added to liquids and foods. It pairs very well with a number of different food types, including citrus fruits and seafood. It is also good with pork dishes, with apples and much more.

Also, the root works particularly well in smoothies, especially those with citrus fruits incorporated, as well as in stir-fry dishes, in apple-based beverages and in fish dishes.

It is always recommended that fresh ginger is used, as this allows you complete control over its use and ensures there are no fillers or binders used. When choosing ginger, look for roots that are smooth and wrinkle-free. Due to the root ageing, it begins to lose moisture, which shows the wrinkled skin on the outside of the root.

Choose unwrinkled, smooth, firm roots that have little flexibility (bendable roots are usually dry and lack flavour). Also, the aroma should be spicy, or “hot”.

Ground ginger is used in many dishes. If you choose to purchase pre-ground ginger rather than grinding your own, buy from a trusted brand. Also, the general equation is one-eighth of a teaspoon ground for every one tablespoon freshly grated. 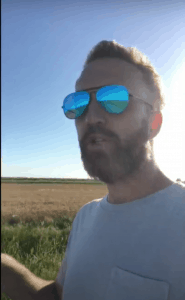 Hi, I’m Christopher Flatt I have experience working in professional kitchens all over the UK since 1996. This includes  rosette restaurants, luxury 5-star hotels and event caterers.  Working with a wide range of foods that specialise in the British/European style.

“I never had a career path structure in my plan as I never started off in culinary school or had that mind set at the time. For myself, I enjoyed being in the professional kitchen. I had the intention of doing washing up for a year or so and go back to college!!

However, I found the sounds, the smells, the people and of course the food in kitchens was incredibly alluring. I also found that I would be able to practice my own skills learning mostly from cooking books with a lot of trial and error. Although I completed the NVQ level 2 at the bistro style restaurant I was working at from 1997 – 2000 in Cambridge.

A massive bonus of this has been that I now have extensive experience and knowledge of working in a huge range of kitchens with all kinds of people and working on all the different sections.

From a simple pub style where I am pretty much doing everything from peeling potatoes to the desserts. And to my most recent placement of working as a CDP in an ultra luxury hip 5 star hotel in central London.

I have been like a lost dog wandering round from kitchen brigade to another, looking for some meaning!”