Chef Jobs Based In Manchester Hotels

An introduction to working in Manchester and the chef jobs benefits

Manchester is the second most visited city in the UK. With two of the biggest football teams in the world. The city also has a rich musical presence with many high profile artists from the city. Manchester has two AA rated 5 star hotels and over 10 AA rated 4 star hotels. These hotels make a great option outside of London to begin and progress a professional chef career.

Finding Accommodation And Living In Manchester

A Few Facts About The City Of Manchester

An Indication To House Prices In Manchester

Out And About In Manchester – Alcohol Prices 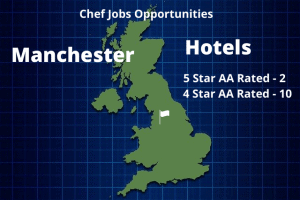 Working in Manchester as a chef can be a lot of hard work, so for some fun. There are many bars and clubs with luxury hotels to help build a stable career. Here are the  top 10 things to do in Manchester as ranked by travellers on Tripadvisor.